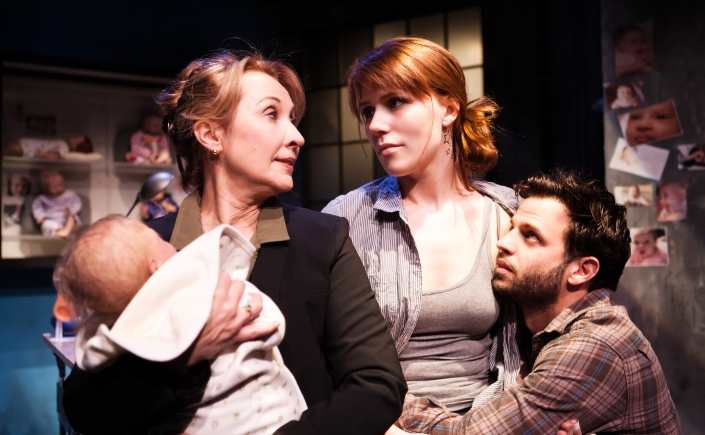 “spins into deeply affecting territory… Dohrn’s compact script bristles with sharp, breezy dialogue, peppered with pop-culture, art-school and Freudian references. In Josh Costello’s skillful stagings, as seen at Friday’s final preview, edgy comedy eases into serious emotional territory as Kelly’s fears about motherhood and the awful facts of her infancy are revealed… The catalyst is the infallible Lorri Holt… a battle between rage, grief and self-control flashing across her face is a heart-stopper… ”
–Robert Hurwitt, SF Chronicle

“A major triumph… Reborning will be a strong contender for any award given for the Best New Play of 2011… Costello has drawn magnificent performances from his three-actor ensemble… This is a powerful play performed by three exceptionally strong actors… While Reborning delivers a solid and extremely satisfying dramatic experience to theatregoers, Dohrn’s play offers something even more enticing to the artistic directors of regional and community theatres: an economical unit-set, three-actor show that barely lasts 80 minutes. Performances of Reborning continue at SFPlayhouse through June 11. You don’t want to miss it.”
–George Heymont, Huffington Post

“Aside from the well-crafted sense of atmosphere, the intricacy of the characters’ relationships is what drives this one home …”
–SF Station

“Reborning a smash hit… SF Playhouse has again burnished its image as the risk-taking leader in the Bay Area producing innovative drama with the world premiere of Reborning… When you add a superlative cast interacting with precision timing there is no wonder that opening night of this world premiere received a spontaneous standing ovation… This is a must see play for Bay Area theatre goers.”
–For All Events

“excellently produced… Followers of San Francisco theatre will not want to miss this outstanding premiere”
–Examiner.com