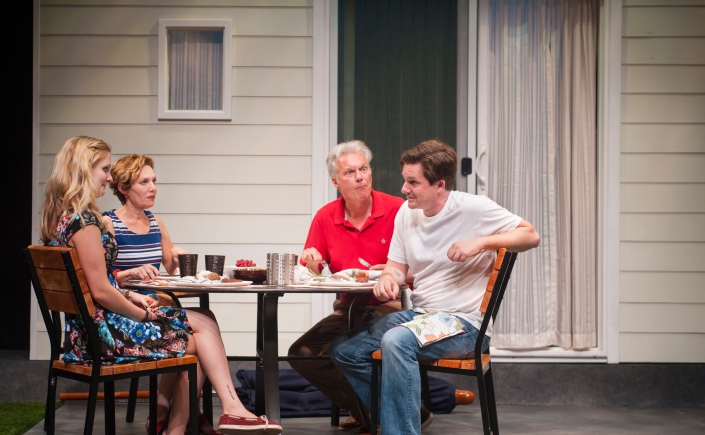 "Detroit isn’t so much a city as a state of mind in Lisa D’Amour’s darkly comic, curiously compelling play... a series of getting-acquainted barbecues yields funny, revelatory and ever more combustible results... the power of the titular metaphor for urban bankruptcy and disappearing jobs lingers, infusing the finely drawn, escalating interactions of director Josh Costello’s crafty regional premiere at the Aurora... comic and deeply poignant... In 'Detroit,' it’s the American dream that’s going up in smoke."
-Robert Hurwitt, SF Chronicle

"[one of the ten best plays of 2015] Fireworks explode in the psyche instead of in the sky... in this sizzling satire... Smoothly directed by Josh Costello in its regional premiere at Berkeley's Aurora Theatre, this blistering 100-minute comedy of manners captures the way a volatile economy implodes the soul from within..."
-Karen D'Souza, San Jose Mercury News

"Detroit is scary good. Not only is it incredibly smart, funny, and blessed with actors whose impeccable timing is evident in every scene, it’ll nibble on the back of your brain all the next day. You might leave the theatre with a vague unease, but that’s directly proportionate to the amazement you experience when this one finally unpacks itself in your mind."
-Cy Ashley Webb, Stark Insider

"The director and his cast deftly build the mounting agitation until it reaches a level of wild frenzy... Gnawing at an open wound buried deep in the American psyche, the play is hilarious and unnerving at the same time."
-Sam Hurwitt, KQED