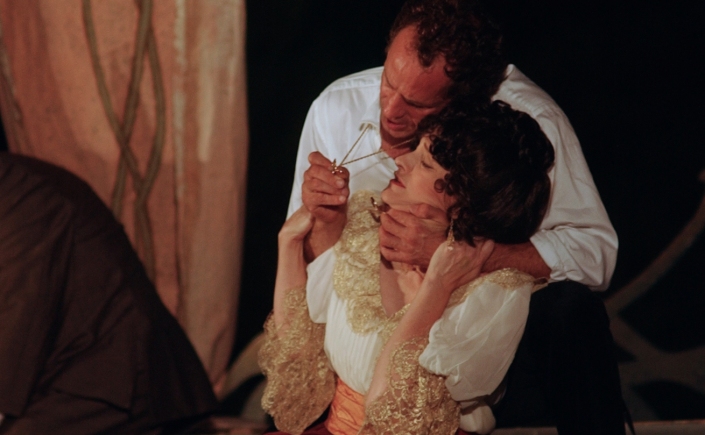 Hamlet played in July and August 2006 at Shakespeare-by-the-Sea; performances were in parks all over Los Angeles and Orange County for audiences in the hundreds — over 700 people attended the closing night performance.

I blogged the process of directing this production over at Blogging the Dane. All my analysis and thoughts about the play are there.

Timeless tragedy in a beautiful setting

THOUGH IT’S certainly open to debate, “Hamlet” is probably the most beloved of Shakespeare’s tragic heroes.

Since 1602 when it was written, “Tragedy of Hamlet” has been translated, updated, adapted and performed all over the world. In addition, the demanding part of the Prince of Denmark has become a challenge for actors everywhere to test their dramatic skills.

Though I’ve seen myriad interpretations of “Hamlet” over the years, I was anxious to see how Shakespeare by the Sea handled this immortal drama – which is playing in repertory with “The Comedy of Errors” through Aug. 12.

I wasn’t alone. Hundreds of people flocked to beautiful Point Fermin to bask in Shakespeare’s words, the park’s natural surroundings and the sunset over the ocean. And it’s free, courtesy of Shakespeare by the Sea, a company whose mission is to make The Bard come alive for young and old in the South Bay area.

Just because it’s free doesn’t mean it’s amateurish. Quite the contrary. This is a first-rate production of working professionals who demonstrate their talents under the informed, high-spirited direction of Josh Costello.

The success or failure of this classic tale of murder, mayhem, madness and incest rests on the shoulders of the actor portraying Hamlet, and Mark Joseph is simply sensational. A member of California Repertory Company in Long Beach, Joseph commands the stage from his opening scene on the ramparts (the one with the ghost of his father) through his dying words at the end of the play.

Almost everyone reading this review knows the story: Something is definitely rotten in the state of Denmark! Out of blind ambition and lust, Uncle Claudius (Don Formaneck) kills his brother, theking, Hamlet’s father. Then in less than two months, he connivingly seizes his brother’s throne and marries Hamlet’s mother Gertrude (Jill Cary Martin), the king’s widow.

When the ghost of Hamlet’s father demands revenge, Hamlet – feeling completely helpless – delivers his world famous monologue (”To be or not to be”) and feigns madness. From this point on, tragedy is heaped upon tragedy until the bloody, awful end.

In spite of its dark, inevitable plot, there’s a lot of humor in “Hamlet,” as there is in all of Shakespeare’s writing. In this case, Chris Roberts is terrific in his portrayal of the dithering old Polonius. Also enjoyable is the good-natured give-and-take banter between Laertes (Aaron Sherry) and Hamlet before their relationship gets thwarted and the three parts played by John E. Farrell (the Ghost, Player King and wise old gravedigger).

As for Ophelia, Rebecca Lincoln is a vision of virginal beauty as the tragic love of Hamlet’s life. Barbara Suiter and Jim Van Over play off of each other well as manipulated students Rosencrantz and Guildenstern. And Crystal Sershen portrays Horatio, Hamlet’s loyal steadfast friend.

Although Valerie Wright’s lovely costumes suggest that this version of “Hamlet” is set in the 19th century, Aaron Jackson’s functional set is completely timeless. Kudos to Martin Noyes for his bang-up job as fight director. Everyone knows the deadly outcome of the duel between Hamlet and Horatio, but the gripping scene is so realistic, the audience is completely captivated.

Take my advice and don’t miss “Hamlet.” Grab a warm sweatshirt and blanket, pack a picnic and head for San Pedro.

“a first-rate production of working professionals who demonstrate their talents under the informed, high-spirited direction of Josh Costello… Mark Joseph [as Hamlet] is simply sensational… the audience is completely captivated… don’t miss Hamlet!”
-Long Beach Press-Telegram