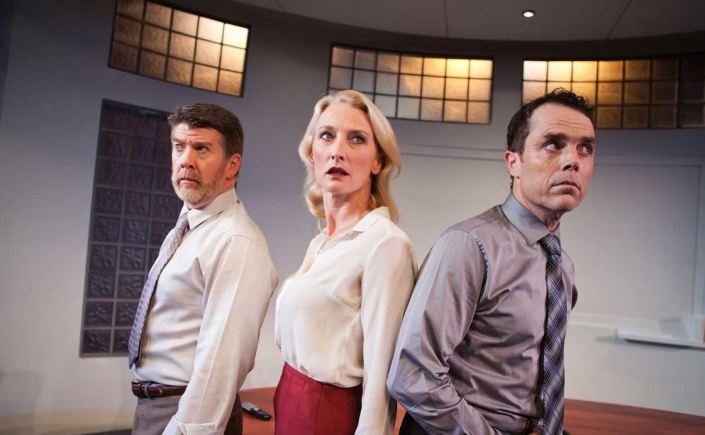 “It’s essentially the same play — with the same cast and director — but Aaron Loeb’s “Ideation” has matured very nicely since its world premiere almost a year ago in the San Francisco Playhouse’s developmental Sandbox series. The devilishly funny and demonically dark comedy about management consultants that opened the Playhouse’s 12th mainstage season Saturday is as sidesplitting and, if anything, more deeply disturbing than it seemed at first encounter… the very fine acting ensemble seems to have deepened its portraits of the characters’ constantly escalating and excruciatingly logically based paranoia. Director Josh Costello has honed the pacing to a fine edge. And the much elevated design package substantially if subconsciously raises the social, political and ethical stakes.”
–Robert Hurwitt, SF Chronicle

“‘Ideation’ is just a fancy word for idea generation, a particularly organized method of brainstorming. In the play, a team of management consultants is tasked with coming up with a strategy for a project that’s at best highly morally questionable and possibly monstrous. At first they seem amusingly oblivious to the horrific implications of what they’re talking about, even blithely cracking jokes about it. But as they methodically work through how the project would work and who exactly would need to know about it, they realize how little they know about what they’re working on.

In another world, Ideation might be a suspense thriller. You have the frequently shaken sense of how the world works, the growing paranoia and the ever-shifting sense of who might be in on it, if there even is an “it” to be in on. But as creepy as it is, it’s also hilarious, especially in director Josh Costello’s sharp staging with a stellar cast.

Carrie Paff balances brisk self-assurance with harried exasperation as Hannah, the upper-level management representative at the meeting. (Everyone’s clad in sharp business attire by costumer Michelle Mal.) She’s especially frustrated with Scooter, the useless assistant foisted on her by the CEO as a favor to the kid’s rich and powerful father. Played with an oblivious grin and breezy sense of entitlement by Ben Euphrat, the kid is infuriatingly indifferent to his actual job tasks as he keeps inserting himself in the conversation to play with the big boys.

Mark Anderson Phillips is pricelessly entertaining as Brock, the project leader, a self-satisfied wheeler-dealer whose wheels are constantly turning from one direction to another, whether he’s mercilessly mocking someone or zooming through an increasingly intricate mental maze of doomsday scenarios. Michael Ray Wisely is wry and shrewd as Southern-accented business veteran Ted, a dogged pragmatist who gets as caught up in mental exercises as the next guy, but just wants to get back to work. Jason Kapoor is smart, subdued and sensitive as Sandeep, the junior member of the team. Sometimes heard (as voiced by Clive Worsley) but never seen, the CEO nevertheless looms over the entire proceeding, as the team has to present its plan to him at the end of the play’s 90 minutes.

Loeb’s script is smart and funny and full of surprises, and Costello and the cast keep the suspense tight and the humor sharp. (Zaque Eyn’s sound design makes particularly artful use of a Britney Spears song.) There’s a lot of clever niggling over details and quibbles about word choices, such as “crematoriums” versus “crematoria.” Holed up in Alicia Griffiths’ simple meeting-room set, the consultants continue to use the same methods in their near-panic that they do when they’re comfortable in their element, making liberal use of the whiteboard to chart out scenarios and options. If they’re getting themselves in far deeper than they could have imagined, at least they’re doing it in a methodical way.”
-Sam Hurwitt, KQED

“Glimmers of a social conscience blossom into hysterical paranoia in Aaron Loeb’s new play. Trains of logic turn in upon themselves and become derailed in comically rational conspiracy theories in the San Francisco Playhouse world premiere…  director Josh Costello’s snappy production… the talent assembled on that stage, particularly the central trio of desperate schemers trying to salvage an imminent video-conference presentation to the CEO… Mark Anderson Phillips’ unself-consciously arrogant, quick-thinking Brock – the way he sputters “so-so-so-so” with each brainstorm is a treat – and Michael Ray Wisely’s older, better-socialized Ted fixate on solving technical problems with a passion almost as infectious as it is funny. As they reveal more details, though, your worst suspicions about the ethics of the project may underestimate the edgy outrageousness of Loeb’s sense of humor… Paff, Phillips and Wisely create a hilarious maelstrom of doubt, teamwork, fear, conniving, suspicion, reassurance and dread… a very funny, sharply staged and brightly performed piece. True to its title, Ideation is bound to make you think.”
-Robert Hurwitt, SF Chronicle

Don’t you love it when a new play starts out and you really like it, then it turns into something else and you like it even more? That’s what happens with Ideation, a world-premiere play by local scribe Aaron Loeb that is part of San Francisco Playhouse’s Sandbox Series, an incubator for new plays.

As new plays, Ideation is in remarkably good shape primarily because Loeb’s writing is so smart, sharp and full of grounding humor. It also helps that director Josh Costello has done such incisive work with his excellent cast. This is straightforward, bare-bones drama: one simple set (a generic office conference room by Alicia Griffiths), no special effects, consistently good performances and a script that continually surprises.

…And that’s the joy of Ideation – a workplace comedy/drama that becomes quite a serious and seriously thrilling thriller… the sheer delight in the mystery of Ideation is in full flower… a thrillingly electric theatrical experience.”
-Chad Jones, TheatreDogs

New York Times Critics' Pick
"The sinister tangos with the madcap in 'Ideation,' a comedy that satirizes office politics and skewers groupthink, even as its annihilation scenario comes to seem unsettlingly plausible. Written by Aaron Loeb and directed by Josh Costello for the San Francisco Playhouse, it gradually ramps up the uncertainty and moral horror of its little band of collaborators, played by a first-rate ensemble."
-New York Times

"the must-see play of the fall"
-Chad Jones, theaterdogs

"as creepy as it is, it's also hilarious, especially in director Josh Costello's sharp staging with a stellar cast... Loeb's script is smart and funny and full of surprises, and Costello and the cast keep the suspense tight and the humor sharp"
-KQED

"Don’t you love it when a new play starts out and you really like it, then it turns into something else and you like it even more? That’s what happens with Ideation... Loeb’s writing is so smart, sharp and full of grounding humor. It also helps that director Josh Costello has done such incisive work with his excellent cast... sheer delight... a thrillingly electric theatrical experience."
-theaterdogs

"under the astute direction of Josh Costello and with a crack acting ensemble... Loeb's play simply soars."
-SF Examiner

"Hugely enjoyable. The performances are simply superb, the action is well-paced, the direction by Josh Costello finely balanced."
-Examiner.com