“Prescient thriller is well worth watching… Sure it’s science fiction, but the most sobering aspect of Josh Costello’s bracing adaption of Cory Doctorow’s best-selling young-adult novel may be how rapidly events have caught up with the 2008 book… That’s one reason the show has generated enough well-deserved buzz to extend its run another two weeks. Briskly staged by Costello, “Brother” is a fast-paced techie-political adventure upholstered in clever live and animated video projections and energized by Chris Houston’s score and Daunielle Rasmussen’s freewheeling choreography. It’s also, Doctorow fans be warned, a radically cut and altered version of the book, but one that retains its attitude and rabble-rousing message. Performed with youthful conviction by three actors… Marissa Keltie is compelling as his super-smart, very direct hacker rival turned dedicated partner and girlfriend… the story and actors generate a momentum that’s hard to resist. Costello succeeds best in interweaving the story’s thriller plot and its comically touching romance with its outspoken politics. By the perhaps too-wishful-thinking end, we’re all fired up to embrace the Bill of Rights – as radical as that document now seems.”
–Robert Hurwitt, SF Chronicle

“Custom Made’s ‘Little Brother’ requires watching… skillfully done and works remarkably well… It’s a tense, power-packed play with some hilarious lines and stirring speeches, eloquent, touching and infuriating in all the right places. The show’s not just a pleasure to watch; it’s also a bit of due diligence that just may help preserve your democracy.”
–Sam Hurwitt, Marin Independent-Journal

“It’s a rare thing, really too rare, to find an audience eagerly erupting into political discussions between acts of a play. But that’s what Little Brother inspires, and in an unaffected way, without pretension or unwelcome goading. It’s too cool, confident, and contemporary for that… three sharp young actors (Daniel Petzold, Marissa Keltie, and Cory Censoprano) smoothly embodied a fleet series of characters in a story pitting a group of Mission District high school teens against the Department of Homeland Security… Little Brother is probably the most exciting thing on stage just now, alive like few other productions in its response to the present moment”
–Robert Avila, San Francisco Bay Guardian

“This is the best kind of political theatre. Thought provoking, suspenseful, emotionally real, uncomfortably close to the hard truth. For this extraordinary production, Custom Made Theatre has assembled some of the most distinguished talent in the Bay area… These folk are the cream of the theatrical crop. The design staff is equally remarkable. Miyuki Bierlein‘s costumes are exactly right as is Chris Houston‘s sound design. Pauline Luppert‘s video design is as polished as one could imagine. Krista Smith‘s lighting does an amazing job of capturing the look of San Francisco with light alone, from the early morning sun in the Mission to the ocean reflected light of the Sutro Baths. This is an important production that is not to be missed. It is likely, I think, to remain a highlight of the 2012-2013 season. Very highly recommended!”
–TheatreStorm and Examiner.com

“…a total marvel. Somehow, writer/director Josh Costello managed to condense the novel down to a two-hour play, without losing any of the impact… powerful and brilliant, and the cast was note-perfect… If you’re in the Bay Area, this is worth going out of your way for.”
–io9

“…this flawless production. The visuals are absolutely stunning… searing and sizzling performances.”
–BeyondChron

“Too often artistic directors bemoan that young people are not going to legitimate plays. Those who are complaining should visit the Custom Made Theatre to find out what they are doing right. The Sunday evening performance of their latest hit Little Brother was another sold-out house populated with young attentive, appreciative people… This flawless production is bolstered with stunning visuals and perfect technical timing. The projections on the back wall are in themselves amazing but the actors are the make the evening a joy”
–For All Events/TheatreWorld

“Thrilling adaptation of Cory Doctorow’s Little Brother… Despite the changes, the central message remains strong, and the play stays true to the voices of its young characters, who are a convincing mixture of precocious intelligence, naïve idealism, and adolescent cynicism… Cory Censoprano is the standout, he portrays the most characters and the widest range of emotions, including a wrenching scene near the very end”
–Examiner.com

“Writer-director Josh Costello’s adaptation of Cory Doctorow’s novel blew me away when I saw it last January. Little Brother lays out the eerily familiar scenario of a crackdown on civil rights following a terrorist attack on a public structure, but this time the San Francisco Bay Bridge has been blown up and innocent American teens are being detained and interrogated, and it’s up to a group of teenage hackers to fight Big Brother. Costello’s dynamic three-person staging for Custom Made brought it all to life in a dynamic and inventive way, and I loved it so much that I decided to publish the play in the January/February issue ofTheatre Bay Area magazine, which comes out this week.”
-Sam Hurwitt, The Idiolect

world premiere
based on the novel
by Cory Doctorow
adapted and directed
by Josh Costello
Custom Made Theatre Co.
San Francisco
2012

Little Brother is available for licensing. There is a three-actor version for professional theaters, and a large-cast version for student groups. Contact me for more information.

Much more information available at the Little Brother Live blog.

Named one of the best plays of 2012 by the SF Bay Guardian and The Idiolect.

Nominated for the Steinberg Award and six Bay Area Theatre Critics Circle Awards. Named the runner-up for the Glickman Award.

Goldstar Roar of the Crowd winner. 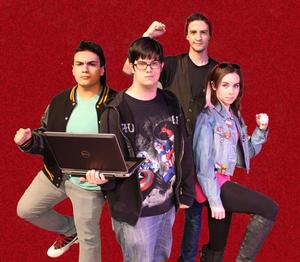 The large-cast version premiered at Lewis University outside of Chicago in February 2015.

Flyer for the first high school production in May 2015.